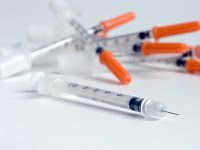 Drug use and the spread of disease often go hand in hand, especially when addicts use drugs intravenously. In the past it was difficult to acquire clean syringes. Over the years a number of organizations have worked hard to provide addicts with access to clean needles, but there are still a lot of people who do not have this access. In most states, these days, people can walk into a pharmacy and purchase syringes without a prescription which has helped reduce the spread of viruses like Hepatitis C and HIV. California has recently decided to jump on the band wagon after Governor Jerry Brown signed two bills that increase access to sterile syringes.

The new bills will allow the Fresno needle exchanges to operate legally after county supervisors made them illegal. Despite the ruling, needle exchanges operated illegally because they felt that it was a cause worth breaking the law for. The program, which has been running for 15 years, exchanges up to 10,000 needles a week.

In a statement, Governor Brown said he believes the bill “can reduce the spread of communicable diseases and the suffering they can cause and, at the same time, respect public safety and local preference.”

Addicts who visit needle exchanges not only acquire clean needles, they also have a chance to talk face to face with addiction counselors who often guide them towards treatment or a 12-step program. Most addicts actively using do not have many encounters with people outside of those they use with. There is no question that providing clean needles is an effective way to get people back on the right path.