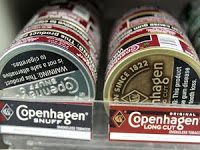 Baseball is taking a turn that not many thought it would take with the announcement of a chewing tobacco ban. Sports fans will no longer be seeing a circular outline in Major League Baseball (MLB) players’ back pockets, the circle being a tin of chewing tobacco. One might imagine the new labor agreement prohibiting players from carrying tobacco in their uniform is upsetting to players and they are probably wondering what exactly they are supposed to carry in their back pocket.

The fact of the matter is that millions of youngsters across the globe idolize baseball players, those who see their favorite players chewing are more likely to want to partake themselves. Chewing tobacco is not a safe alternative to cigarettes; in fact smokeless tobacco is extremely bad for one’s health being linked to multiple forms of cancer.

In the early 2000s, Tony Batista, turned his back pocket inside out as a way of showing young fans that he wasn’t carrying any tobacco, according to ESPN. This was a bold move that was not adopted by many of their players who did not share the Batista’s sentiment. Hopefully, at the end of the day players will realize that the new ban will do everyone, from players to fans, a lot of good.

Old habits die hard, naturally there will be a number of players who disregard the ban and probably try to hide the fact they are chewing in one way or another. Either way this is a step in the right direction.