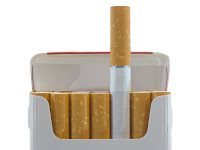 Quitting smoking is extremely difficult despite the countless methods available. Over the last few years the smoking cessation drug Chantix has widely been reported to have serious side effects associated with it. The drug has seemingly worked well for some people, although for others it appears to have caused serious mental health problems that have led some people to want to commit suicide.

A new study that was conducted has found that Chantix may cause serious mental health side effects in more people than previously thought. The researchers who took part in the study have found that Chantix should be used as a last resort when it comes to quitting.

FDA data between 1998 and 2010 was observed during the study, where people claimed to have adverse side effects for three smoking cessation treatments: Chantix, bupropion, an antidepressant used for smoking cessation, and nicotine replacement products. Of the total 13,243 adverse drug effect reports, about 3,250 of them involved suicidal behavior, self-injury or depression; of those cases, 90 percent were linked to Chantix.

If you are trying to quit smoking be very cautious if you are thinking about Chantix; even people without a history of mental health problems may be at risk when taking a new drug. Quitting smoking is obviously a great decision when it comes to one’s health, but not if it jeopardizes one’s mental well being.