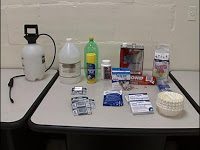 Methamphetamine use had been on the decline over the last decade for a number of reasons. The government took certain steps to make it harder to come by the active ingredient pseudoephedrine which can be found in a number of over the counter cold medicines. Organizations like the Meth Project have helped educate people on the dangers of using methamphetamine. Unfortunately, in the last three years meth production has risen and there has been a spike in meth use across the country.

Two possible reasons for the jump in usage is the Mexican super labs producing huge quantities of the drug; the other reason is that a new method for making meth has been developed known as the “shake and bake” method. This new method has been the cause of a number of people ending up in the emergency room with serious burns, according to the Associated Press.

The new method requires that one combine raw, unstable ingredients in a 2-liter soda bottle, but if the cap is removed too quickly or the plastic bottle is punctured it can cause an explosion, severely injuring someone. An AP survey that was conducted found that in some burn units across the country up to one-third of patients were injured while making meth. Meth-related burns costs an average of $130,000 per patient to treat, 60 percent more than other burn patients, most meth burn patients do not have health insurance.

The high price for treatment has caused some burn units to have to close down, the AP reports. With at least seven burn units closing in the last six years.

The shake and bake method has become a popular route for meth producers to take for a number of reasons. The formula:

The DEA reports that incidents related to meth production, including seizures of labs, dumpsites of chemical and glassware, increased to 11,239 in 2010, after falling to 6,095 in 2007.