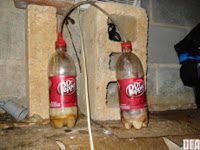 Midwestern and southern states have become some of the largest producers of methamphetamine – an epicenter of meth production.

States with the largest number of lab seizures in the last year were:

Missouri was the only state that seems to be on the rise from the year before, according to the AP survey. However, the Drug Enforcement Administration claims that the numbers of meth lab seizures remained about even during the past two years.

The new “shake-and-bake” method of making meth may be the cause of the rise in methamphetamine production. A soda bottle and a few different ingredients is quick, easy, and extremely dangerous method of producing the drug. The labs may be smaller but there are many more of them.