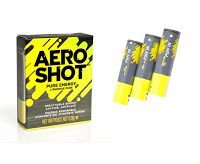 Over the last few years the amount of people mixing energy products with alcohol has become a major concern amongst health officials. Mixing stimulants, even caffeine, with alcohol is dangerous and can absolutely be a fatal combination. It gives drinkers a false sense of being less intoxicated thus resulting with individuals drinking more to the point of alcohol poisoning or convinces them they are more equipped to operate a motor vehicle in their current state. Clearly both scenarios are dangerous which is why law makers have banned the mixing of energy ingredients with alcohol after last year’s incidents with the popular alcohol infused energy drink Four Loko, a drink that at one time contained four different kinds of energy ingredients.

The battle against mixing energy with alcohol continues as a new inhaler which contains energetic ingredients debuts, potentially sitting next to 5 Hour Energy Shots at the liquor store. AeroShot Pure Energy is an inhaler containing caffeine, B vitamins, calorie-free sweeteners and lime flavoring. Each inhaler contains six to eight puffs.

Schumer requested that the FDA review AeroShot, right now only available in France, as well as selected locations in Boston and New York City, and online. Schumer was one of the senators who asked the FDA to take action against the manufacturers of caffeinated alcoholic drinks.

The issue at hand is a serious one that needs attention; energy products have become a multi-million dollar market and it is clear that they are not going anywhere anytime soon. Fortunately, progress was made regarding bans on alcohol infused energy drinks over the last year, but, it does not stop people from mixing up their own drinks with products like Red Bull sold at just about every liquor store. Health officials need to be vigilant in the attempts to educate young adults and teenagers about the dangers of such practices.