Look For The Silver Lining 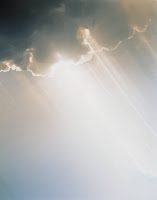 Look for the silver lining

When e’er a cloud appears in the blue.

Remember some where the sun is shining,

And so the right thing to do,

Is make it shine for you.

A heart, full of joy and gladness,

Will always banish sadness and strife.

So always look for the silver lining,

And try to find the sunny side of life.

Perhaps you recognize the above lyrics. Could be you’re old enough to remember when young children were often taught this little song in grammar school or in such longstanding youth organizations as the Brownies or Girl Scouts (founded in 1912).  The song itself was written in 1919 with music by Jerome Kern and lyrics by George Gard “Buddy” DeSylva. It was originally used in a Broadway musical and for the next 94 years many famous artists have recorded it and it has been used in a number of movies and television shows, most recently featured in a memorable dance scene between Lady Mary and Matthew Crawley in the currently popular Masterpiece Classic series “Downton Abbey.”  So recalling the lyrics and the message is a pleasant way to start a New Year. Don’t you think?

The 2012 Holiday Season, like most, offered a variety of new movies for people of all ages. But one movie in particular, Silver Linings Playbook, told the story of family members trying to cope with a son and brother diagnosed with bi-polar disorder. Silver Linings Playbook is billed as a romantic comedy-drama, but many may likely refer to it as a “black comedy” (humor that makes light of otherwise solemn subject matter).

If you see Silver Linings Playbook and you are lucky enough to have never dealt with family members who suffer from bi-polar disorder, obsessive compulsive disorder, depression, a gambling addiction or grief, then chances are you will giggle throughout as the story unfolds. If, however, you have experience with any of these disorders, then you may consider the screenplay (adapted from Matthew Quick’s novel of the same name) as The Hollywood Reporter’s David Rooney did when he said in his review: It’s “cheerfully yet poignantly exposing the struggles, anxieties, disorders and obsessions of ordinary people, this is a film as odd as it is charming.”

This movie is Rated R; however, the preview trailer has been approved for appropriate audiences by the Motion Picture Association of America, Inc.

There are many who will appreciate this movie for its stellar cast, its powerful story of the family dynamic, and for offering a silver lining for those struggling with recovery. Some have questioned how well the film handled mental illness. You might find interesting Gwynne Watkins’ interview with Harvard Medical School psychiatrist Dr. Steven Schlozman. The truth is when we view any movie it is through our own personal lens; sometimes that lens is more a kaleidoscope…very complex and frequently changing.

As always, we welcome your comments…

Previous PostParents: Are Your Children Bullying Others About Food Allergies And Obesity? You May Want To Think Twice About A New Year’s Resolution!Next PostUS Navy Battles “Bath Salts” – Watch Their Powerful PSA