This weekend our nation will celebrate Memorial Day with Monday, May 27th, being the day that we all take a bit of time to remember the men and women who died in service to our country while serving in the Unites States Armed Forces. It is always a solemn day, but for those of us who experienced the loss of a family member or friend due to a service connected injury and/or disability…the day can bring with it bittersweet memories…the fathers who never came home, the brothers missing in action, the grandfathers or aunts and uncles never known, and those who made it home but whose lives were cut short as a result of the service connected injury.

Of course Memorial Day recognizes our war dead from each and every conflict that the United States has been part of; however, today we thought we would take a few minutes to focus on World War II. If you are a history buff, then you probably know that 16 million Americans served in the armed forces during World War II. 405,399 were killed in action, roughly 416 deaths per day from December 1941 through September 1945. According to the Veterans Administration there are approximately only 1.2 million veterans remaining of the 16 million who served our nation in World War II; those remaining are dying at a rate of 800 per day.

According to the National WWII Memorial website, “President Clinton signed Public Law 103-32 on May 25, 1993, authorizing the American Battle Monuments Commission (ABMC) to establish a World War II Memorial in Washington, D.C., or its environs…Construction began in September 2001. The memorial opened to the public on April 29, 2004, and was dedicated on Saturday, May 29, 2004. The memorial became part of the National Park System on Nov. 1, 2004, when it was transferred from the American Battle Monuments Commission to the National Park Service, which now operates and maintains the memorial.”

Imagine, World War II ended in September 1945 and it was 59 years later when the World War II Memorial was dedicated.

If you have not heard of The Honor Flight Network, “it is a non-profit organization created solely to honor America’s veterans for all their sacrifices. We transport our heroes to Washington, D.C. to visit and reflect at their memorials. Top priority is given to the senior veterans – World War II survivors, along with those other veterans who may be terminally ill.”

The first Honor Flight took place in May 2005; you can read more about the history of this organization here. 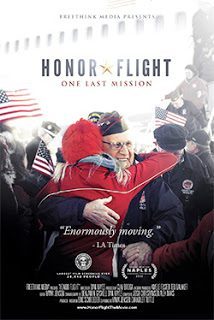 Honor Flight – One Last Mission is a documentary about four World War II veterans and a Midwest community coming together to give the veterans a trip of a lifetime to see firsthand the World War II Memorial in Washington, DC.  If you would like to see the entire documentary, you should know it is available on Digital & On Demand, iTunes, Amazon.com…and in theaters in some communities throughout the United States. You can see the official trailer here.

If you are having trouble viewing the video, watch it here.

This Memorial Day take a few minutes for yourself: Remember your loved ones who served and who died for our country. Take time to thank our surviving veterans who may be living with a permanent physical disability, another chronic service connected disability like post traumatic stress syndrome (PTSD), traumatic brain injury (TBI), depression or other mental health issue.

Wishing you a peaceful Memorial Day…