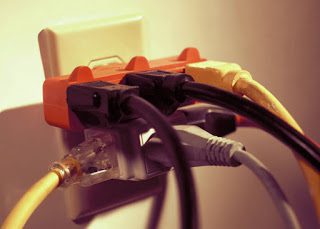 When was the last time you walked around your home and thought about safety? Just the other day a friend mentioned that she was going to be taking care of her 10 month old granddaughter for a few days. It occurred to her that she had not thought about baby-proofing her home since her own children were in elementary school. She started considering electrical outlets, stairs, kitchen and bathroom cupboards that contain dangerous household chemicals, litter boxes, dangerous furniture, household plants…well, let’s face it, the list is endless. And it is important to remember that danger lurks outside as well: swimming pools, hot tubs, poisonous plants, decorative fish ponds, and chemicals to name a few.

Most new parents spend a lot of time and money to baby-proof their homes; additionally, it is not unusual for people to safety proof their homes if their elderly family members are going to visit or move in permanently.

This week the Pediatric Academic Societies held their annual meeting in Washington, DC. According to their website:

The Pediatric Academic Societies (PAS) Annual Meeting is the largest international meeting focused on research in child health. We bring together a variety of groups to—not only discuss original research, which has been the hallmark of the PAS meeting, but to also discuss how this research can be applied to actual clinical practice in pediatrics. This alliance also provides opportunity to discuss other critical issues that affect child health such as public policy and advocacy.

More about this study…

ScienceNews, Magazine of the Society for Science & The Public reports:

“Roughly one in six children deemed at risk of suicide say that there are firearms at home, a study in urban centers finds. Stephen Teach, a pediatric emergency medicine physician at Children’s National Medical Center in Washington, D.C., and his colleagues analyzed responses collected from 524 children and adolescents interviewed at several urban hospital emergency rooms in the United States. Of the patients, 180 were in the ER with psychiatric complaints and 344 were seen for other reasons.

What’s more, 26 of the at-risk kids said there were firearms at home, Teach reported May 6. Eight of them said they knew how to get access to a gun or ammunition, and four kids could get to both. Teach said that roughly 90 percent of people who attempt suicide with a gun kill themselves. “It’s a lethal means, much more than pills,” he said. Doctors in emergency rooms “are in a unique position to reduce access to firearms,” he said, by assessing kids’ risk and talking with parents.”

Some final thoughts about safety proofing our homes…

We began this post by discussing the task of safety proofing our homes for our children, but we should remember that safety proofing needs to include gun safety, as well as prescription drug safety. If you are a gun owner, then you should, as Bill Brassard spokesman for The National Shooting Sports Foundation cautions, “store firearms locked, unloaded and stored separately from ammunition, which also should be locked.”

According to Dr. Teach, one of the study’s authors, parents should be aware of changes in their children’s behavior like: withdrawing from friends, substance abuse, changes in school grades, changing friends, dropping hobbies or sports, and changes in eating habits. We can apply the same observations to our young adult children.