Just in case you are not familiar with the lyrics shown above, they are from the 1940’s hit The Java Jive recorded by The Ink Spots. The music is by Ben Oakland with lyrics by Milton Drake. The Manhattan Transfer had a cover in the late 60’s. It is a fun song probably based on children’s rhyme dating back to about 1888!

If you are having trouble viewing this video, you can see it here.

Last month you may remember reading about Wrigley deciding to pull their new caffeine gum “Alert Energy Caffeine Gum.” They actually decided to temporarily halt sales and marketing out of respect for the Food and Drug Administration (FDA) which has launched a review on caffeine this past April.

This week, Bloomberg Businessweek reported that even though the FDA still remains unsure if energy drinks and supplements are bad for consumers, sales are still growing actually increasing by 6.7 percent in the year ended May 19, 2013.  Monster Beverage sales jumped 9%. Even U.S. coffee sales are up 8.1 percent in the last 52 week period.

Forbes reported on June 6, 2013, that caffeinated foods and beverages are attracting more scrutiny. This particular article has a great chart that breaks down who are energy drinkers – adults vs. teens. Here are some statistics:

“Adults, too, like these products, though not to the extent of teenagers. According to the GfK MRI Survey of the American Consumer®, 18% of consumers ages 18+ consumed an energy drink in the last six months. Here we see that, as with teens, males are the predominant consumers, at 61%. Millennials (born 1977-1994) are overwhelmingly the biggest age group, at 54%, but GenXers (1965-76) and Baby Boomers (1946-64) are pretty evenly represented at 23% and 19%, respectively. As for annual household income, the $200,000-plus bracket sees the least usage (about 4%).”

SCIENCE WORLD REPORT ran an article yesterday on the results of a new study that was presented on May 26, 2013, at the annual meeting of the Association for Psychological Science. The study was conducted at Centre College in Danville, KY. The research showed: “That while the participants who drank the caffeinated drinks had faster brain responses compared to those who just drank water, there was no difference between those who consumed the caffeinated water or the 5-Hour Energy.”

On June 3, 2013, Dr. Marc Siegel offered his own observations on caffeine facts and fiction with FoxNews. 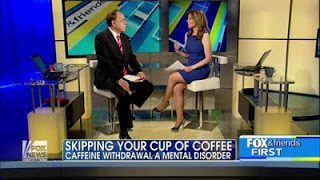 At Cottonwood Tucson we pay attention to the power and frequency of cravings for food and/or mood-altering substances can be influenced by how one eats. Patients learn that an inconsistent or imbalanced diet can create a disrelation in all of the previously mentioned neurotransmitters. Our clinicians stress that a poor diet can also create blood sugar fluctuations that affect energy and concentration and increase the desire for sugar and caffeine – both of which can fuel anxiety and trigger cravings to use alcohol and drugs. Patients learn that, in some newly recovering alcoholics, abstinence from alcohol can lead to increased desire for sugar. Sometimes this desire is subtle and shows up as a craving for fruit, fruit juice or sugary beverages. Of course fruit is healthy, but it is still sugar and, for optimal mood, it needs to be taken in appropriate quantities. Caffeine, too, can become a crutch to the newly recovering addict/alcoholic. A stimulant, caffeine feels like fuel in the body, but this effect can lead to the skipping of meals and increased desire for more sugar. We teach patients that the use of caffeine in the morning can also result in a craving for more caffeine and the impulse to overeat later in the day. Our patients learn that eating often and including the right amounts of carbohydrates, proteins and fats will help the management of cravings, for both food and mood-altering chemicals.