“The best way to find yourself is to lose yourself in the service of others.” Mahatma Gandhi

HOW SERVICE CAN SAVE US

Those five words are the essence of this week’s TIME Magazine cover.  The magazine is dated July 1, 2013; however, the issue always arrive a number of days prior to the edition date. Also in the bottom left hand corner of the magazine cover there are these simple words: “Our annual national service issue.” According to Richard Stengel, TIME Magazine’s Managing Editor:

“Six summers ago, we published a cover story called “The Case for National Service,” in which I proposed that every American high school student do a year of service after graduation. While there have been gains over the past six years–such as a new focus on addressing the high school–dropout epidemic through service and the establishment of a social-innovation fund to scale programs that work–the idea of national service has moseyed along without much progress. Until now. …I believe service can help us deal with a multitude of national problems, from unemployment to education to adapting immigrants to American society. And it can and will foster a generation of leaders who can work together to get big things done for our country.”

Can Service Save Us?

TIME’S cover article “Can Service Save Us?” was researched and written by Joe Klein. It focuses on returning Iraq and Afghanistan vets, most particularly the 261,998 who have received a provisional diagnosis of post traumatic stress disorder (PTSD) at a VA medical facility throughout the country between 2002 and the first quarter of 2013. This is a very interesting article, one that we hope you might be able to read on-line (if you are a TIME subscriber) or you might think about picking up a copy of this issue when you are shopping this week.  In the meantime, here is a video from the TimeMagazine’s YouTube Channel that features Joe Klein discussing How Service Can Save Us.

As Mr. Klein so eloquently asks:

Imagine the impact a robust national-service program — like the service corps proposed by the Aspen Institute’s Franklin Project — would have on our nation of couch dwellers. If service is therapeutic, imagine the impact, especially on boys, who are having more trouble than girls graduating from high school and college these days. If service can reconnect individuals to their communities, imagine the impact on our waning sense of civic engagement, our weirdly hollow democracy in which active citizenship has been displaced by marketing and political sloganeering. Would it be so bad if the rest of us became more attuned to the values and can-do spirit our veterans have brought home from the military?

If you are a member of Alcoholics Anonymous (AA), then you are familiar with A.A.’s Legacy of Service by Bill W.  According to the A.A. Service Manual:

Recovery, Unity, Service – these are the Three Legacies given to the whole membership of A.A. by its founders and their fellow oldtimers. When this heritage was announced, at the St. Louis Convention in 1955, celebrating A.A.’s 20th birthday, Doctor Bob was already gone. But Bill W. spoke for him and the other pioneers, as well as for himself, in turning over to all of us the responsibility for A.A.’s continuation and growth.
Hence, an A.A. service is anything whatever that helps us to reach a fellow sufferer – ranging all the way from the Twelfth Step itself to a ten-cent phone call and a cup of coffee, and to A.A. ‘s General Service Office for national and international action. 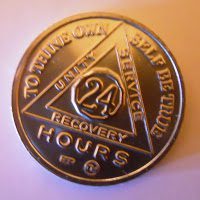 As we read through the TIME Magazine article today, we thought about the fact that June 2013 is coming to a close and June is PTSD Awareness Month. We considered the importance of introducing our patients to Alcoholics Anonymous (and other 12-Step Groups) and the importance of sharing the legacies of Recovery, Unity and Service.