It was September 1988, that’s right 25 years ago, when Bobby McFerrin’s song “Don’t Worry, Be Happy” was released. Here are a couple of interesting facts about this song:

For fun you can listen to the song in this video.

So many news reports about happiness 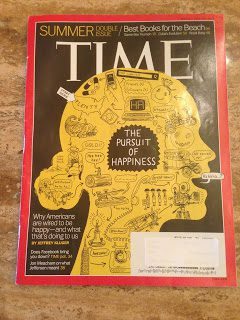 Just about two weeks ago TIME Magazine’s cover story was “The Pursuit of Happiness.” It is an interesting read and there is a lot of information provided. For example:

“Since 1972, only about one-third of Americans have described themselves as “very happy,” according to surveys funded by the National Science Foundation. Just since 2004, the share of Americans who identify themselves as optimists has plummeted from 79% to 50%, according to a new Time poll. Meanwhile, more than 20% of us will suffer from a mood disorder at some point in our lifetimes and more than 30% from an anxiety disorder. By the time we’re 18 years old, 11% of us have been diagnosed with depression.”

Today, we thought we would share a link to this article and offer you the opportunity to read a few more recent articles about happiness and stress.

How does happiness affect our health…?

Yesterday The Atlantic published a really interesting article: Meaning Is Healthier Than Happiness. This article was written by Emily Esfahani Smith and discusses new research completed recently and published by Barbara Fredrickson of the University of North Carolina and Steve Cole from UCLA. Their research was published in the Proceedings of the National Academy of Sciences of the United States of America: A functional genomic perspective on human well-being.  In Ms. Smith’s article, she offers:

Cole’s past work has linked various kinds of chronic adversity to a particular gene expression pattern. When people feel lonely, are grieving the loss of a loved one, or are struggling to make ends meet, their bodies go into threat mode. This triggers the activation of a stress-related gene pattern that has two features: an increase in the activity of proinflammatory genes and a decrease in the activity of genes involved in anti-viral responses.

What about status and stress?

“…sense of control tends to decline as one descends the socioeconomic ladder, with potentially grave consequences. Those on the bottom are more than three times as likely to die prematurely as those at the top. They’re also more likely to suffer from depression, heart disease and diabetes. Perhaps most devastating, the stress of poverty early in life can have consequences that last into adulthood.”

This piece, among other health related matters, was discussed at great length by Dr. Nancy Snyderman and Dr. Ezekiel Emanuel when they were guests on Morning Joe this past July 29th. If you are having trouble viewing the video, you can see it here.

Wishing our readers a restful, stress free and happy weekend…

Today’s post is a little different, offering a number of insightful articles to read. Take or make some time for yourself this weekend.