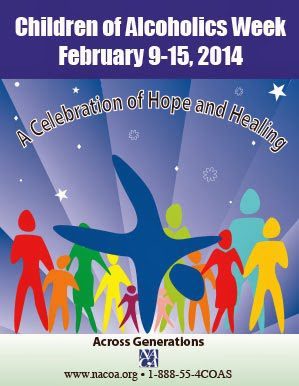 A week for awareness…

This week, February 9-15, 2014, is Children of Alcoholics Week ~ A Celebration of Hope and Healing. Depending on your own life story you may or may not know any children of alcoholics; however, statistics provided by the American Academy of Child and Adolescent Psychiatry (AACAP) indicate that “one in five adult Americans have lived with an alcoholic relative while growing up.” Think about that number: one in five! The AACAP offers more clarification:

“In general, these children are at greater risk for having emotional problems than children whose parents are not alcoholics. Alcoholism runs in families, and children of alcoholics are four times more likely than other children to become alcoholics themselves. Compounding the psychological impact of being raised by a parent who is suffering from alcohol abuse is the fact that most children of alcoholics have experienced some form of neglect or abuse.

A child being raised by a parent or caregiver who is suffering from alcohol abuse may have a variety of conflicting emotions that need to be addressed in order to avoid future problems. They are in a difficult position because they cannot go to their own parents for support.” (continue reading here)

If you visit the website for the NACoA you will learn what this not for profit (501c3) organization is all about. Their mission is simple: “To eliminate the adverse impact of alcohol and drug use on children and families.” Their site offers information and resources for clergy, health professionals, teachers, student assistance, social workers…and more.

The NACoA was founded in 1983 when a group of professionals met in November 1982 and again in February 1983 and formed what became the National Association FOR (not of) Children of Alcoholics. If you are involved in the field of addiction, recovery, counseling and/or research, then you probably know many of these founders.

Cottonwood Tucson is particularly proud to say that our InnerPath Retreats Clinical Director and Facilitator Rokelle Lerner is a founder of NACoA!

Some useful tools for the Children of Alcoholics (COA) Week…

There are activities in many communities across the nation and COA Week is also celebrated internationally to bring awareness to these children at risk. Here are a few ways to start the conversation with a small child by simply saying: “It’s a disease; it is not your fault, and there are safe people who can help.”

In closing, we would like to share an interesting film created by the children in one Alaskan town…it is called The Village Fog.

Remember…while there are many dates and weeks to remember throughout the year, Children of Alcoholics Week is always celebrated internationally each year during the week in which Valentine’s Day falls.