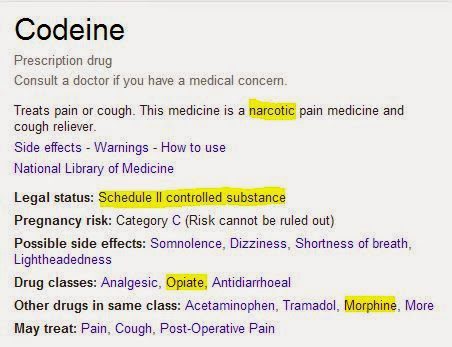 Check out this “snippet” of information about CODEINE

This past week the major news outlets have been reporting on the results of a new study that examined how often hospital emergency department physicians prescribe codeine to patients ages 3 – 17. We will talk more about the study, but first we would like you to take a look at this “snippet” of information that might appear on the 1st page of search engine results if you google the word codeine.

If you’re a parent, did you know or remember that codeine is a narcotic, schedule II controlled substance, in the opiate drug class, as is morphine?  When was the last time you read the codeine sulfate oral solution Medication Guide? According to the Medication Guide:

What is the most important information I should know about Codeine Sulfate Oral Solution?

Pediatrics, the official Journal of the American Academy of Pediatrics, published online April 21, 2014, National Patterns of Codeine Prescriptions for Children in the Emergency Department. The lead author is Dr. Sunitha V. Kaiser of the University of California, San Francisco. The researchers study emergency department data covering the time period from 2001 to 2010, reviewing pediatric codeine prescription rates.

Of the 189 million emergency department visits by children ages 3 to 17 that were reviewed, it was determined that 2.9% received a prescription for codeine. Over the 10 year period that represents 5,481,000 children or in any given year roughly 548,000 children leave an emergency department with a prescription for codeine. In the previous decade the percentage was 3.7%, so the number has decreased but the researchers still believe not to a point where it would seem the prescribers are following the recommended guidelines offered.

The American Academy of Pediatrics began warning about codeine in 1997 and again in 2006. In 2012 and 2013, the federal Food and Drug Administration issued a black-box alert warning against using codeine in kids after surgery to correct sleep apnea because three children died and one suffered life-threatening respiratory arrest. Since 1999, 10 kids have died and three have overdosed on codeine, the FDA said.

In addition, the World Health Organization has ditched the drug from its recommended painkillers for kids and health agencies in Europe and Canada restricted codeine use to people older than 12.

As we have often said parenting is a journey, a process…it is not an event. It is natural that a parent wants to trust the treatment offered and the care providers who tend to their children in hospital emergency departments. But parents also need to be vigilant. They need to ask questions. And as JoNel Aleccia, senior health reporter and editor for NBC News cautioned: “Experts say that parents and health care professionals need to rethink their reliance on the popular opiate – and even consider retiring the drug linked to at least 10 deaths and three overdoses in recent years in kids from toddlers to age 9.”