Take a few minutes and think back to your own childhood… 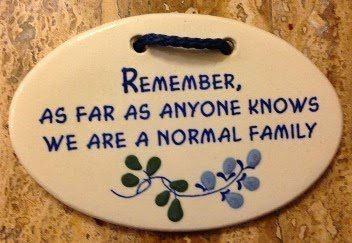 As we mature our perceptions of our “growing up” years are distinctly our own. Try a little test the next time you are with your sibling(s). Ask what they remember about a specific event that you all attended during your childhood years. You might be amazed at how different each one’s “story of life” is recalled.

Of course one’s memory may be affected by their age at the time of the event or other things that occurred on that day. For example, if you are trying to recall a particular birthday celebration and it wasn’t your birthday and coincidentally during the party you cut your hand and needed stitches …there is a pretty good chance you might remember the cut more than who attended the party.

It seems we grow up hoping, believing and sometimes convincing ourselves that we are part of a normal family and how we interact with our family members is normal behavior. The truth is it is your normal!

Now, what if you consider sibling bullying normal behavior?

In the January 2015 issue of the Journal of Family Violence research conducted at the University of Nebraska Lincoln was published –  All in the Family: Retrospective Study Comparing Sibling Bullying and Peer Bullying. The researchers were Lori Hoetger, Katherine Hazen and Eve Brank. They surveyed 392 undergraduate students wanting to learn how sibling aggression is perceived. The researchers were surprised to learn that most of the survey respondents considered sibling aggression normal. And they didn’t want think of it as bullying. Brank offered: “We had theorized and discussed a little bit that maybe this is happening between people that presumably love each other and care about each other, so I think everyone just accepts it as normal behavior.”

Normalization of sibling aggression also played a role in the finding that surprised the researchers most: “The most striking result to us was that people who reported experiencing more sibling bullying when they were younger were less likely to report (peer-to-peer) bullying if they saw it,” Hoetger said. “There seemed to be this sense that they were so used to it when they were younger, they might not see it as a big deal or that it was worthy of reporting.”
This has implications for peer-to-peer bullying interventions that are being developed, she said. It can be difficult to ask children to report bullying if they consider it “normal.”

More research needs to be conducted, but these findings call into question current national statistics regarding bullying, both inside and outside the family.

Parents can be proactive, as well as reactive…

As a parent watching our children argue or pick on each other can be pure torture. You struggle with trying to let them work out their own little battles or always intervening by ordering “time-outs” or distracting them with another activity. There are certainly times when as parents we don’t even realize that the sibling bickering has quietly turned into bullying.

Today when researching this topic we came across an interesting article written by Melissa Martin, PhD., a child therapist, consultant and educator in Wheelersburg, Ohio. Dr. Martin provided sound advice:

All good advice, don’t you think?

While this most recent study asked good questions and added to the conversation it is important to realize that research is happening at a number of universities. At the University of Oxford researchers found that children bullied by
their siblings by the age of 12 were twice as likely by age 18 to report
depression or anxiety. The University of New Hampshire last year released results of a study that indicated 32% of children who said they had been a victim sibling bullying also had higher rated of mental health issues.

If you are professional in the field and looking for a good resource book on this subject check out the second edition of John V. Caffaro’s SIBLING ABUSE TRAUMA (Published 2013).