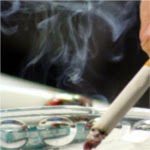 Quitting a tobacco product of any kind is challenging, especially cigarettes. There are a number of smoking cessation options available, including nicotine replacement therapies, such as gums, patches, and medications. While those methods have proven effective with numbers of people, relapse rates among smokers are still extremely high. New research suggest that providing financial incentives to smokers to quit is more effective than offering free counseling and nicotine replacement therapy, HealthDay reports.

“Roughly 18 percent of Americans smoke regularly — a percentage that hasn’t changed in more than a decade despite the proliferation of new therapies. We desperately need new interventions, and this study shows that financial incentives are likely as good, if not better, than other available interventions,” said lead author Dr. Scott Halpern, an assistant professor of medicine, epidemiology, medical ethics and health policy at the Perelman School of Medicine at the University of Pennsylvania.

The new study involved more than 2,500 CVS Health employees. The participants were split into five groups:

The researchers conducting the novel study found that 16 percent of those who were part of the reward groups were still smoke free after six months, compared with 10 percent in the deposit programs and 6 percent in the usual care group. CVS will use the findings to launch an employee anti-smoking program called “700 Good Reasons,” according to the article.

Employees that smoke who would like to participate will be asked to deposit $50. If, after a year, the participating employees test negative for tobacco, they will get their $50 back, as well as $700 more.

“When compared to the estimated $4,000 to $6,000 incremental annual cost associated with employing a smoker over a non-smoker, a $700 to $800 incentive paid only to those who quit seems well worth the cost,” senior author Kevin Volpp, MD, PhD said in a news release.

The findings appear in the New England Journal of Medicine.