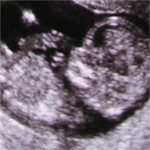 The science is irrefutable; consuming alcohol during pregnancy can lead to serious, lifelong health problems for a child. While most women are aware of this, every year a significant number of babies are born with fetal alcohol spectrum disorder (FASD), more commonly referred to as fetal alcohol syndrome (FAS). Unfortunately, many women are unaware of a pregnancy, sometimes for several weeks after conception, and continue to drink.

A new pilot project is being conducted by the University of Alaska Anchorage, in which researchers are attempting to determine whether providing pregnancy test dispensers in bar bathrooms is effective at preventing FAS, NPR reports. A few bars in Alaska have begun placing free pregnancy tests in women’s bathrooms as part of the two-year, state-funded project.

“A lot of women now understand that they shouldn’t drink [while pregnant],” says Deb Evensen, an Alaska-based expert in fetal alcohol syndrome prevention. “But a lot of people are still drinking in early pregnancy and before they know they’re pregnant—and that can cause a lot of damage.”

In many bars across the country, female restrooms already display FAS warning posters. Providing free pregnancy tests next to the already displayed posters may be more effective than the poster by itself.

“We’re always looking for ways to try and improve our ability to provide information,” says David Driscoll, director of the university’s Institute for Circumpolar Health Studies.

Alaska is an ideal state to conduct a pilot project of this nature. The Centers for Disease Control and Prevention (CDC) has found that Alaska has one of the highest rates of binge drinking among women, according to the article. Alaska state officials estimate that more than 120 children are born each year suffering from symptoms of fetal alcohol syndrome, which in 2012 represented in excess of 1% of all live births.