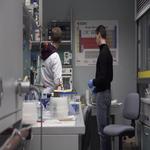 Addiction is a complex disease that scientists continue to unravel; the hope being that findings will help reduce addiction rates and develop more effective forms of addiction treatment. It has been argued that environment plays a large role in addiction, and that altering an individual’s surroundings can influence addictive behavior. New research suggests that a stimulating learning environment can change the brain’s reward system, protecting it against drug dependence, ScienceDaily reports.

Researchers at University of California at Berkeley conducted an environment experiment with mice in order to track cocaine cravings.

“We have compelling behavioral evidence that self-directed exploration and learning altered their reward systems so that when cocaine was experienced it made less of an impact on their brain,” said Linda Wilbrecht, assistant professor of psychology and neuroscience at UC Berkeley and senior author.

After weeks of receiving cocaine injections in a particular compartment of their quarters, some of the mice were able to engage in activities. The mice who were permitted to explore, learn, and seek treats were less likely to seek the cocaine compartment once the activities concluded, according to the report. On the other hand, the mice that were restricted were eager to return to the chamber where they had been given cocaine.

“Our data are exciting because they suggest that positive learning experiences, through education or play in a structured environment, could sculpt and develop brain circuits to build resilience in at-risk individuals, and that even brief cognitive interventions may be somewhat protective and last a relatively long time,” said Wilbrecht. “Overall, the data suggest that deprivation may confer vulnerability to drug seeking behavior and that brief interventions may promote long-term resilience.”

The findings were published in the journal Neuropharmacology.