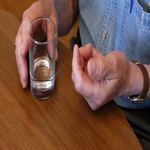 Unsafe drinking practices are most commonly associated with teenagers and young adults. While the association is not erroneous, there are other age groups whose alcohol consumption is of concern. New research suggests that many “baby boomers” are consuming alcohol at unsafe levels, ScienceDaily reports.

Researchers at King’s College London have found that one in five people over the age of 65 are drinking unsafely, and they are usually of higher socioeconomic status. The findings come from an analysis of 27,991 anonymous health records from people 65 and over. The researchers found 1,980 individuals, out of the 9,248 people who reported drinking alcohol, drank at unsafe levels, according to the article.

“As the Baby Boomer generation become seniors, they represent an ever increasing population of older people drinking at levels that pose a risk to their health. This study shows the need for greater awareness of the potential for alcohol related harm in older people, particularly those of higher socio-economic status, who may suffer the consequences of ill health from alcohol at an earlier age than those in previous generations,” said Dr Tony Rao, lead author from the Institute of Psychiatry, Psychology & Neuroscience at King’s College London.

The research showed that men were more likely to consume alcohol at unsafe levels than women, the article reports. While men only comprised 46 percent of the health records, they made up 60% of the drinkers and 65% of the unsafe drinkers.

“This research highlights that as GPs we need be more aware of the risk of older people, especially men, drinking excessively. Reducing alcohol misuse is important to prevent premature death and serious negative health effects, such as alcoholic liver disease, which are big burden on our health system. Alcohol excess carries additional risks in the older population such as falls and confusion,” said Dr Mark Ashworth, study author from the Division of Health and Social Care Research at King’s College London.

The findings were published in BMJ Open.