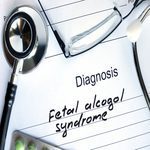 It is well understood that consuming alcohol while pregnant can lead to a number of problems for the baby, potentially impacting the newborn into adulthood. Despite that knowledge and countless disclaimers, many women choose to imbibe throughout the pregnancy. Some pregnant women with have a glass of wine here or there, and some will drink regularly throughout the pregnancy. The American Academy of Pediatrics published a report which said that no amount of alcohol should considered safe for an unborn child, TODAY reports. The organization stated that prenatal alcohol exposure is the leading preventable cause of birth defects and intellectual disabilities in children.

The report states that exposing a fetus to alcohol puts the baby at risk of being born with Fetal Alcohol Spectrum Disorders (FASD), an umbrella term which covers the array of conditions that can develop as the result of prenatal alcohol exposure – including Fetal Alcohol Syndrome (FAS). Babies whose mothers drank whilst pregnant are at a heightened risk of developing attention-deficit/hyperactivity disorder (ADHD) and other learning impediments, affecting one’s abilities, according to the article.

They may experience problems with:

“There is no known absolutely safe quantity, frequency, type, or timing of alcohol consumption during pregnancy, but having no PAE (prenatal alcohol exposure) translates into no FASD,” the report said. “Despite research evidence clearly documenting the spectrum of detrimental consequences of PAE, too many women continue to drink alcohol during pregnancy.”

Last month, the Centers for Disease Control and Prevention (CDC) released a report which found that one in ten pregnant American’s admitted to consuming alcohol on occasion, and one-third of those women admitted to binge drinking, the article reports.

“The bottom line is that we don’t know how much is safe, so therefore the only reasonable recommendation really is to advise women not to drink at all,” Dr. Natalie Azar, an NBC News medical contributor, told TODAY.

The report was published in the journal Pediatrics.