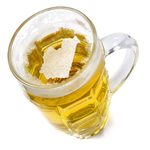 Alcohol is used more than any other mind altering substance in the world and consumption can lead to a number of preventable illnesses; yet alcohol use does not carry same stigma as cigarettes and drugs. Every year, around 88,000 Americans lose their life to alcohol-related causes, according to National Institute on Alcohol Abuse and Alcoholism (NIAAA). When you consider that 16.6 million adults had an alcohol use disorder (AUD) in 2013, it is hard to believe that the alcohol industry continues riding roughshod.

The global alcohol industry is massive and generates billions of dollars from people’s suffering, while taxpayers end up covering the bill. The economic burden of alcohol in the United States is upwards of $200 billion every year. Naturally, the United States is just one market that has been fully tapped; there are a number of other markets that “big alcohol” would like to target. This goal will be more easily achieved by the merger of the world’s two largest beer manufacturers, a union that has many health experts concerned, BMJ reports.

The impending merger of Belgium-based Anheuser-Busch InBev and London-based SAB Miller will create a company that is estimated to produce one-third of all beer sold worldwide. The two companies hope to supply markets in developing nations, especially in Africa; the researchers point out that Africa is “a critical driver of growth for the combined company,” according to the article.

“The health implications of this forecast are disturbing: market growth on this scale is predicated on exploiting Africa’s low per capita consumption of beer, targeting low-income consumers to drive increased sales,” Professor Jeff Collin and colleagues at the University of Edinburgh wrote. The African target “echoes that of transnational tobacco companies, with which the alcohol industry shares strategic similarities and has close corporate links as well as comparable health effects,” the researchers added.

Exploiting developing nations will lead to serious alcohol related health problems. Such nations lack the infrastructure that western nations have, making it extremely difficult to handle a surge in addiction rates and alcohol related illnesses – creating an economic burden.

What makes the alcohol industry’s move into developing nations unique when compared to the tobacco industry efforts to do the same, is the fact that alcohol companies are not underpinned by regulations. The authors point out that the global alcohol industry “continues to occupy an ambiguous space in which an indirect acknowledgement of serious health effects coexists with the prospect of partnerships and shared objectives.”