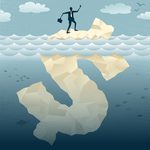 Why do people consume alcohol? There are number of answers to that question, but most people will probably say that they drink to let loose for a bit – giving their mind a break after a long week at work. Let’s face it, alcohol can ease people’s mind allowing them a reprieve from the day to day stresses. While most people can drink on the weekends and forget it about it during the work week, some people do not find that to be so easy and continued use throughout the week can quickly turn into a problem.

What’s more, when people begin to associate alcohol with normal stress relief, they are more likely to turn to alcohol for serious tribulation – such as losing one’s employment. In 2007, the nation saw an economic downturn, what became known as the “Great Recession” – the result of the sub-prime housing loan crisis paralleling. Millions of Americans, not only lost their homes to foreclosures, they lost their jobs as well – a meltdown that echoed the great depression in a number of ways.

With personal strife, often comes a rise in excessive drug and alcohol use, a trend that could easily be seen during the Great Recession.

In fact, the Bureau of Labor Statistics reported that unemployment rose sharply between 2007-09, from 5% to 9.5%. While those statistics may not be that big of a surprise, you may find it interesting to learn that new research indicates that even those who did not lose their job may be more likely to drink during times of economic uncertainty, Medical News Today reports. The research was published in the journal Psychology of Addictive Behaviors.

Researchers at the University of Buffalo Research Institute on Addictions found that alcohol consumption among people who didn’t lose their job during the recession of 2007-2009 increased their alcohol use and excessive drinking outside of work. The findings come from phone surveys of 2,501 employees conducted in 2002 and 2003; and a second survey of 2,581 employees during and after the recession between 2008 and 2011.

“Despite the increased stress at work that came with the recession, employees decreased their alcohol use during the workday to avoid putting their employment in jeopardy,” said Michael Frone, PhD, of the Research Institute on Addictions at the University at Buffalo, in a news release. “But perhaps to reduce stress, they increased both excessive alcohol use and drinking right after work.”