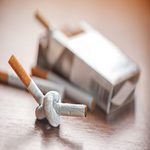 In the 21st Century it probably goes without saying that the vast majority of adults are aware of the health risks associated with smoking cigarettes. If you were to ask a smoker, former smoker or non smoker about the potential dangers of smoking they would probably answer you by listing a multitude of cancers and they would be right. But it turns out that smokers may be at risk of more than just cancer, and we can now add mental health disorders to the ever increasing list of reasons to avoid tobacco.

New research suggests that the rate of mental illness among smokers is increasing, and those at the greatest risk are recent smokers, HealthDay reports. The findings were published in the journal Molecular Psychiatry. What’s more, when compared to older smokers, the researchers found that nicotine-dependent smokers who starting using tobacco in the 1980s were more likely to have mental health disorders, such as:

“Our study confirms that recent smokers, though a relatively smaller group than those who started smoking decades ago, are more vulnerable to psychiatric and substance use disorders,” lead author Ardesheer Talati of Columbia University Medical Center said in a university news release. “These findings suggest that today’s adolescent and young adult smokers may benefit from mental health screening so that any related psychiatric or substance use problems can be identified and addressed early.”

The researchers involved in the study analyzed data from 25,000 people born in the 1940s – 1980s, according to the article. While there is no question that the national smoking rate has been steadily dropping since the `60s, the researchers found that the percentage of nicotine-dependent tobacco users has been climbing.

The findings of the study are especially important with regards to addiction recovery because many alcoholics and addicts have co-occurring mental health disorders, such as bipolar disorder. If the research holds true, and smoking has a role in the development of mental illness, it stands to reason that smoking cessation should be addressed early in recovery. Additionally, we now know that the use of nicotine products can also increase the chance of relapse.