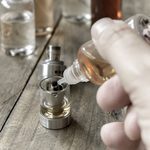 Marijuana has long been considered by many, right or wrongly, the “gateway drug;” the drug first used that leads to the use of other mind altering substances. While that may be true in some cases, research tells us that true gateway drugs are alcohol, followed by tobacco. Marijuana is actually comes in third when it comes to substances first used by 12th graders.

That being said, the research tells us that greater efforts are needed to prevent teenage alcohol and tobacco use. Teenage tobacco use rates are lower than in previous decades; however, it turns out that teenage tobacco product use hasn’t fallen since 2011, according to HealthDay. Federal officials believe that this may be the result of electronic cigarettes, commonly referred to as e-cigs.

The Centers for Disease Control and Prevention (CDC) reports that one in four high school students use a tobacco product of some kind, and e-cigarette use has become more common than the use of traditional tobacco products. E-cigs produce a vapor that contains nicotine along with a fruity flavor of some kind, which might be the reason for the devices becoming a favorite among teens. The findings were published in the CDC’s Morbidity and Mortality Weekly Report.

“E-cigarettes are now the most commonly used tobacco product among youth, and use continues to climb,” said CDC Director Dr. Tom Frieden. “No form of youth tobacco use is safe. Nicotine is an addictive drug, and use during adolescence may cause lasting harm to brain development.”

The U.S. National Youth Tobacco Survey indicates that three million middle and high school students used e-cigs in 2015, the article reports. In 2014, only 2.5 million students reported e-cigarette use. The exponential increase in use among teenagers is concerning, especially when you consider the findings mentioned earlier from the gateway drug study. Teens that become addicted to nicotine are often times more likely to try other addictive substances.

If your teenage daughter has formed an unhealthy relationship with mind altering substances, please contact Cottonwood Tucson. Our 90-day Sweetwater Adolescent Girls Treatment Program can help her get back on the right track, free from drugs and alcohol.