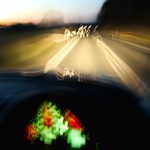 Every adult knows the risk they take when they get behind the wheel under the influence of alcohol. The best case scenario is dodging a bullet and making it home in one piece. After that it gets severely worse, with a DUI that is often accompanied by heavy fines and jail time. For some, however, driving under the influence results in tragedy usually by way of a potential car wreck. It is hard to say what is worse, having to live with waking up after experiencing an alcohol related wreck and learning that the accident took the life of another, or losing one’s own life.

People whose drunk driving results in an accident are often the ones who end up surviving while others perish. There are many people who are spending decades in prison for taking the life of another while driving under the influence of alcohol. We all hear about such tragic events, yet people still decide to play with fire every day of the week. What if people who consume alcohol could be reminded regularly of the risks, especially while they are consuming alcohol?

For those drinking at bars in the Los Angeles area who decide to use the restroom and end up glancing at the mirror, they may be in for a surprise. At one bar, instead of seeing your reflection in the mirror, you see a video of Kris Caudilla who is currently serving a 15-year sentence for DUI manslaughter, NBC News reports. The campaign called “Reflections from Inside,” shows Caudilla, 32, at the RMC Correctional Facility in Lake Butler, Florida.

Caudilla’s statements and questions were prerecorded and played on cue through a monitor behind the mirror, according to the article. What Caudilla says will be a direct response to the comments of the drinkers. The public service announcement (PSA) was created at the behest of We Save Lives, a highway safety nonprofit led by Candace Lightner, the founder of Mothers Against Drunk Driving (MADD). While drunk driving rates steadily declined from the 1980’s onward, from 2010 to date rates have flattened out, according to Lightner. She decided that if PSAs covering victims was no longer working; maybe focusing on the perpetrators would be beneficial.

“I said why not, because the numbers haven’t shifted, even though more laws have passed and PSAs abound,” said Lightner, whose 13-year-old daughter, Cari, was killed by a drunk driver in 1980.

Please take a moment to watch the video below: