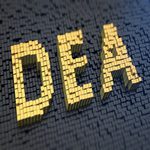 Marijuana prohibition in the United States, some would argue, has done more harm than good. While the drug is both habit forming and can lead to negative health consequences, many Americans are in favor of changing both state and federal marijuana laws. With November around the corner, many states will be voting on joining the 25 states and D.C. that allow for the medical use of marijuana. Other states will be voting on legalizing recreational marijuana use for adults. There are some Americans who had hoped that the current administration would reclassify marijuana before the next inauguration.

However, the U.S. Drug Enforcement Administration (DEA) announced that it will not reclassify marijuana as a drug with accepted medical uses today, Reuters reports. On the other hand, the agency stated that it will increase the number of authorized marijuana manufacturers who can supply researchers on the quest to find medical uses for the controversial drug. The announcement comes in the wake of two petitions which called for the drug’s rescheduling. DEA Acting Administrator Chuck Rosenberg wrote a detailed response to the petitioners outlining the reasons for denial, stating:

“The Controlled Substances Act (CSA) mandates that scheduling decisions be based on medical and scientific data and other data bearing on the relative abuse potential of the drug. Under the CSA, the Food and Drug Administration (FDA), in consultation with the National Institute on Drug Abuse (NIDA), reviews, analyzes, and assesses that data and its medical and scientific conclusions legally bind the Drug Enforcement Administration (DEA).”

In recent years there has been a plethora of research conducted and reports made public which show marijuana as effective in the treatment of certain conditions. Even CNN’s chief medical correspondent Dr. Sanjay Gupta, who was against medical marijuana historically, changed his opinion after seeing the drug dramatically reduce the number of grand mal seizures children experienced. Nevertheless, there is still much to learn about the medical benefits and dangers of marijuana use, and hopefully the DEA’s allowance for expanded research will bring more to light.

We would be remiss if we failed to point out that while marijuana may seem to be benign in nature, it can also carry the potential for abuse and/or addiction. What’s more, the drug has been found to do damage to the developing brains of adolescents, and can also lead to the use of other more insidious drugs. Which is troubling due to the fact that more high school students are smoking cannabis today than they are binge drinking.

If you have a teenage daughter, ages 13 – 17, who has been abusing marijuana, please contact Cottonwood Tucson. Our Sweetwater Adolescent Girls Treatment Program was created to assist teenage girls and their families recover and make necessary changes to improve the quality of their lives. Additionally, we also offer a Young Adult Treatment Program for both men and women.