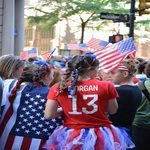 We all need role models in life. Having someone to look up to can help guide one on their course to potential success. Millions of adolescent American boys look up to professional baseball players, hoping that one day that they will be able play ball on national television. Professional athletes inspire people around the globe to hold on to their dreams, and with hard work they, too, can inspire others in the same way when they reach adulthood.

The most popular sport in the world is fùtbol, known in the U.S. as soccer. While the sport’s popularity has steadily increased in the country over the years, men’s soccer is far less popular than the other American sports, such as baseball, basketball and football. However, when it comes to women’s soccer, the case is something altogether different, partly because the women’s team has brought home several World Cup championships and Olympic gold medals. There are a number of great professional female soccer stars in this country, some names you may be familiar with are Abby Wambach and Mia Hamm. A significant number of adolescents girls not just in this country, but around the globe, aspire to play in a World Cup one day, like Wambach and Hamm.

Abby Wambach retired recently, after helping the U.S. women’s team win gold at the 2004 and 2012 Olympics and the 2015 Women’s World Cup. At the age of 36, Wambach’s list of accomplishments is deep, including being named the FIFA World Player of the Year in 2012. Since her retirement, Abby continues to be an advocate for the sport in a number of ways, and she fights for good causes as well.

A new memoir of Wambach was released today, called Forward. As you might expect, soccer is a major point in the publication, but it turns out that the memoir makes public some information that many people did not know about the beloved soccer star. Wambach’s new book discloses that she has battled with prescription drug and alcohol abuse over the years, a problem that had a negative impact on the icon’s life, FC Yahoo reports. Her problem finally caused the retired athlete to hit a “bottom,” when she was arrested for driving under the influence in April. And like many others who have found their way to recovery, a traumatic life event is often needed.

“That night getting arrested was one of the best things that has ever happened to me. Because if I don’t get so publicly shamed and publicly humiliated, I don’t think I wake up,” said Wambach. “I think I was asleep for a lot of years. Asleep to the pleas from my family and friends, and even myself, to get help. So that night I was humiliated enough to wake up.”

Addiction, more times than not, will continue unchecked for years before a person makes the choice to seek help, and change their ways. So many people who have problems with drugs or alcohol are able to function in professional settings, and in Wambach’s case, perform remarkable sporting feats. Because of this, many people will continue to abuse mind altering substances, saying to themselves ‘I pay the bills and feed my family, how bad could I be?’ It is a line of thinking that keeps people trapped in the cycle of addiction for far too long.

“I was stubborn and I was in denial,” Wambach said. “I didn’t want to face the truth.”

Well, now Wambach is facing the truth and has been sober since April, according to the article. Hopefully, her addiction and new found recovery will inspire adolescent girls who are struggling with drugs and alcohol—find the courage to reach out for help. Even in retirement, she can be a role model for mental health issues that affect millions of young people around the globe.