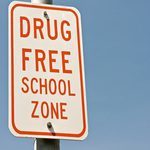 In the 1980’s, at the height of the “crack” cocaine epidemic in the United States, drug-free school zones were created to deter people from dealing narcotics in and around the area. Such laws were considered to be common sense measures in an effort to combat what was, at the time, the most serious drug related problem until being eclipsed by the opioid epidemic we face today.

As you might expect, a number of concerns have been raised over the years about policies that by and large affect minorities. Just like mandatory minimum sentences and zero-tolerance substance rules, draconian “war on drugs” policies mainly impact people of color. Such laws were one of the major contributors to our penal institutions being filled with nonviolent drug offenders.

With the nation facing the most serious drug epidemic in history, states have begun to rethink their drug-free school zone policies, some shrinking in size while others grow, Stateline reports. In an attempt to reduce prison populations comprised mostly of nonviolent drug offenders, some states are reducing the size of their school zones, including:

On the other hand, some other states’ responses to the opioid epidemic are to increase the size of their drug-free school zones, according to the article. People found in possession of even small quantities of drugs near schools, parks and playgrounds face serious penalties. Drug offender punishments, more times than not, do not match the severity of the crime. Those states including:

It is important to point out that increasing the size and scope of drug-free zones could have the unintended effect of making entire cities within the proximity. The Prison Policy Initiative, a nonpartisan research and advocacy group, conducted a study in 2014 showing that 92 percent of the residents of Bridgeport, Connecticut (roughly 148,000) lived in a drug-free school zone.

“You’re increasing the penalties for crime for an entire city,” said Aleks Kajstura, the author of the study. “You’re no longer steering people away from these specially protected zones. There’s nowhere for them to go.”

This is a subject that is likely to be debated for years to come as lawmakers wrestle with policies that make the most sense. To be sure, nobody wants drug dealers conducting business near places of learning or child activity, but if policies are disproportionately affecting minorities who typically are not selling drugs to minors, but happen to be near a school–exceptions need to be or perhaps should be considered. It seems this conversation has been started, we will continue to follow the story-line on drug-free school zones in America.