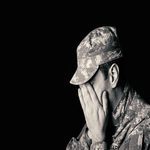 The United States military has long had a torrid relationship with mental health, specifically how it handles mental illness in its ranks. A somewhat paradoxical reality considering that post-traumatic stress disorder (PTSD) goes hand in hand with war; there is really no way around it. Whenever you put thousands of people in high stress environments where individuals are likely to see death first-hand, trauma is likely to be the result.

For many servicemen and women, the horrors of war, while troubling, do not hinder their ability to function in the military or at home. But for a significant number of people, the experience of combat is something that they will never be able to completely shake.

While there are a number of effective forms of treatment and therapies available for treating PTSD, many veterans have trouble accessing help because of what is known “bad paper.” To put it plainly, a dishonorable discharge from the armed forces. Those with less than favorable discharges cannot access benefits to treat the very conditions that their service in the military helped to create. In fact, around 13 percent of post-9/11 veterans have been given dishonorable discharges from the military, The New York Times reports. Many of the same veterans’ only offense was having had suffered from symptoms of either PTSD or traumatic brain injury (TBI).

It turns out that the misconduct that people are being handed bad paper for, is in many cases linked to symptoms of PTSD, and thousands of soldiers have been dishonorably discharged without the due process of a court martial, according to the article. Veterans are being cast away, left with few options after service, due to the status of their discharge often being denied access to veterans’ benefits. Such veterans are at an increased risk of:

Realizing the absurdity of such treatment after fighting for one’s country, many of the aforementioned cast away veterans have spent years fighting to have the status of the discharge amended, the article reports. But, as you can probably imagine, they are met with a dizzying amount of red tape. So, what is to be done?
As the year comes to a close, and the end of a Presidential term that has in many ways been defined by compassion for those who have received unfair treatment (i.e. the President commuting the sentences of hundreds of nonviolent drug offenders), there may be hope for veterans with bad paper found at 1600 Pennsylvania Ave. The organization known as Vietnam Veterans of America has urged the President to use his executive power to pardon all veterans who received bad paper after September 11, 2001. There is precedent for such an action, according to the Veterans Legal Service Clinic at Yale University.

With less than 24 hours before the end of President Gerald Ford’s tenure, he pardoned en masse Vietnam Veterans who violated the Military Selective Service Act or the Uniform Code of Military Justice. President Carter in a similar action, fully pardoned Americans who refused induction into the military by way of the Vietnam-era draft, which was a felony offense. It could be argued that victims of PTSD, TBI or any form of mental illness related to combat, deserve more than anyone the consideration of the executive branch of government. We will continue to follow this important story.

At Cottonwood Tucson we would like to wish you all a happy New Year. For those of you working a program of recovery, this is a good time to acknowledge the progress you have made and show gratitude towards those who have helped you get where you are today. Please have a safe and sober New Year’s Eve.