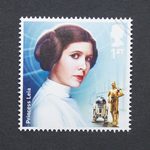 “I haven’t lost my mind, it lost me.” The sobering words of late sci-fi fantasy icon Carrie Fisher, better known around the world as Princess Leia, are chilling to say the least. While Fisher is best known for her cinnamon bun hairdos and brandishing laser blasters, she was also an advocate for mental health and addiction recovery. Hopefully, her efforts with the latter will be just as much part of her legacy as her beloved role in the Star Wars saga which has now spanned nearly 40 years.

Carrie Frances Fisher passed away on December 27, 2016, at the age of 60. Her premature death came as shock to the entire world, and left millions of Star Wars fans in tears, and many unanswered questions about the future of the galactic Empire.

Fisher struggled with bipolar disorder since she was a teenager, which lead her to self-medicate by way of drugs and alcohol. In November, she responded to a Guardian reader’s letter which asked for advice about living with bipolar disorder, a mental illness which can be severely debilitating without treatment and medication. She tells the reader how she refused to believe the diagnosis given in her early twenties. She writes:

“I was told that I was bipolar when I was 24 but was unable to accept that diagnosis until I was 28 when I overdosed and finally got sober. Only then was I able to see nothing else could explain away my behavior.”

In sobriety, she wrote about her illness and struggles with addiction in Postcards from the Edge and Wishful Drinking. Later in life she spoke openly about her battle with bipolar disorder and addiction. Working to develop a sense of community for everyone who has been touched by mental illness.

If you are currently working a program of recovery, then you know first-hand the value of community. Sobriety and recovery are not something that can be achieved on one’s own. Like many who have battled addiction, Fisher found comfort in the rooms of 12-step recovery, having the realization that she was not alone. And like many who came before and after her, she was not a huge fan of 12-step meetings, but she listened and heard something profound that would help her stay the course.

“Initially I didn’t like the groups. I felt like I had been banished to sit with a group of other misfits like myself to sit still for an hour. But then someone said, ‘You don’t have to like these meetings, you just have to go, go until you like them.’ That took me by surprise. I didn’t have to like something I did? Wow, what a concept.”

Back in 2000, Diane Sawyer interviewed Carrie Fisher and it is worth watching:

As the New Year approaches, Cottonwood Tucson would like to extend our sympathies to the Fisher family as they grieve both the loss of Carrie and her mother Debbie Reynolds. If you or your loved is dealing with addiction and/or bipolar disorder, please contact us to learn about our behavioral health treatment plans.