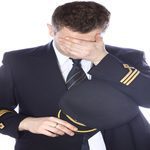 Millions of Americans struggle with clinical depression, a mental health disorder that can impact the course of one’s life—especially if it is left untreated. There are an estimated 16 million American adults (roughly 7% of the population) living with symptoms of depression, according to the National Alliance on Mental Illness (NAMI). While there are effective methods of treatment and medications that can alleviate symptoms of depression, the vast majority of people with clinical depression never receive any form of treatment.

The reasons for people not seeking help are varied, but for some, it is a decision which is made from fear for one’s career. There is new research that suggests that 12.6 percent of commercial pilots meet the criteria for depression, and 4.1 percent had suicidal ideations, The Telegraph reports. Pilots often will mask their symptoms, being unwilling to seek help because it would result in being grounded.

It is not uncommon for people to hide mental illness from their employer, but not everyone’s job involves taking innocent people 30,000 feet up in the air. So, it stands to reason putting someone in the cockpit who suffers from depression and/or suicidal ideations may not be the wisest choice. In fact, pilots are deemed unfit to operate an aircraft after being diagnosed with acute depression, according to the article. Many pilots would rather sacrifice their well-being than jeopardize their career.

The study, conducted by researchers at Harvard University, involved a survey of nearly 3,500 pilots from around the globe, the article reports. As you might imagine, it was difficult to convince pilots to answer questions about mental health, which is why over a thousand of the participants refused to answer any questions on the subject.

The research came in after the Germanwings plane crash of 2015, involving a pilot, who was believed to be mentally ill, intentionally crashing a plane into the French Alps—in turn taking the lives of 150 passengers. Unfortunately, there is no easy solution to mental illness in the cockpit, and the problem may rest in the rules. The findings were published in the journal Environmental Health.

Simply banning a pilot from flying after receiving a diagnosis discourages the honesty of other pilots. It would seem that there should be some kind of process for being reinstated as long a pilot’s symptoms are being treated.

“Pilots need to know that if they admit to a mental health problem, provided they cooperate and recover, their careers will continue,” said Professor Sir Simon Wessely, President of the Royal College of Psychiatrists. “Most people with depression do get better.”

Cottonwood Tucson offers its innovative and nationally renowned inpatient treatment center for
depression. If you need help getting out of the weight of darkness and depression, please call us to start your recovery and regain your life.