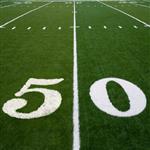 Most Americans came together on Sunday to watch the Super Bowl. A game that made history in more ways than one. The NFL championship game is about a lot of things. Albeit, some of which include consuming too much alcohol and eating less than healthy food. The game can also be an excellent forum to promote good causes during the commercial breaks.

Last year, the NFL caught a lot of flak for some commercial about a drug for the treatment of opioid-induced constipation. A common side effect that accompanies prescription painkiller use. The commercial caught significantly more attention than a public service announcement (PSA) about heroin use. After the game this year, more people are talking about two PSA’s from the National Council on Alcoholism and Drug Abuse (NCADA).

The focus this year was on protecting children and teenagers from their parents’ prescription opioids. “Safe” was the title of a PSA that ran during the halftime ad break, where a father talks about the energy he put into teaching his daughter about gun safety—specifically storing firearms in a safe. The father in the PSA then reveals that after finding his daughter following an overdose with a bottle of pills in her hand, he says, “I should have locked it up.” The PSA “Safe” closes with a statistic about the dangers of opioids: Teenagers, are more likely to lose their life from an overdose than a bullet.

You can see the PSA “Safe” below:

The first PSA highlights the need for locking up prescription opioids, whereas the second PSA used smartphones to warn of the dangers of opioid overdose. In the PSA titled “Smart Phone,” the NCADA reveals that teenagers are more likely to die from overdose, than texting and driving. The commercial shows a mother who is vigilant about keeping her daughter from texting while driving, demanding that her smartphone be locked in the glove box when driving. Had the mother focused more on locking up her painkillers, her daughter overdose could have been prevented. The PSA mother says:

“I put the one thing in her hand that she couldn’t control: painkillers.”

You can see the PSA “Smart Phone” below:

“I think this year’s ads are the most powerful yet,” said Mark Schupp, to the St. Louis Post-Dispatch, the creative director for the project. “There’s a spin to these that I think is very effective.”

You can learn more by visiting the NCADA’s website, The Place To Turn.