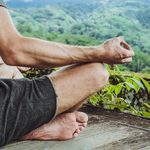 a technique for detaching oneself from anxiety and promoting harmony and self-realization by meditation, repetition of a mantra, and other yogic practices, promulgated by an international organization founded by the Indian guru Maharishi Mahesh Yogi ( c. 1911–2008).

In circles of recovery around the globe, the practice of prayer and meditation is often a vital component of individuals’ programs. Such actions are tied to the spiritual component of addiction recovery, used as a conduit to one’s higher power. Sometimes both practices are employed on a daily basis. However, for some members of the recovery community, whose higher power is perhaps more nebulous than typical deities, forms of meditation are often the “go to” practice for “grounding” and “centering” oneself.

Meditation should never be brushed off or spurned; the practice has helped countless people (not just in the program) make important inner discoveries, and bring one out of a recovery tailspin that may have resulted in a relapse. People in recovery are often times anxious, especially in early recovery when just trying to figure out which way is up can be a challenge. Recovery is something foreign, counter to everything that active addiction encompassed; any action that can help bring you back to earth and focused on the greater goal of long-term sobriety should be welcomed.

Many individuals working a program are also contending with a co-occurring mental health disorders—on top of addiction. Anxiety, depression, bipolar and post traumatic-stress disorder (PTSD) are the most common. The symptoms of any one of the aforementioned disorders can be debilitating, and often times are the catalysts leading to relapse. It is vital that co-occurring disorders be addressed in recovery concurrently. Which can take the shape of going to a meeting and working the steps in conjunction with medication that helps keep mental illness symptoms at bay. However, there is new research which indicates that meditation may actually reduce one’s reliance on medication for treating mental health disorders like PTSD, according to the Medical College of Georgia at Augusta University.

Thousands of young Americans have returned from conflict(s) overseas with a number of scars, many of which are internal. The horrors of war can affect even the most stoic of soldiers. PTSD rates among servicemen and women are high, and much of the time the only treatment they receive are essentially medication band-aids. The symptoms of PTSD often include headaches, memory, sleep and mood issues which can severely impact quality of life. What’s more, PTSD afflicted individuals whose symptoms are not mitigated, will often resort to narcotics (prescribed or not) and alcohol to calm the internal storm. A practice which only provides temporary ease. Over time, one must use more and more to achieve the desired effect. Dependence and/or addiction is often a foregone conclusion in such cases.

PTSD symptoms are commonly treated with antidepressants and anti-anxiety drugs, such as Xanax or Ativan. The new study sought to determine the effect that Transcendental Meditation would have on active-duty service members with PTSD, the press release reports. The research involved 74 people receiving treatment at Dwight David Eisenhower Army Medical Center’s Traumatic Brain Injury Clinic at Fort Gordon, Georgia.

For the study, half of the participants were asked to practice Transcendental Meditation regularly in addition to their other therapy. After just one month, 83.7 percent of the meditation group had stabilized, reduced or stopped their use of psychotropic drugs, compared to the 10.9 percent who had increased their medication dosage. In the non-meditation group only 59.4 percent had stabilized, reduced or stopped taking psychotropic drugs, according to the report. Of the non-meditators, 40.5 percent increased their medication intake. The trends held consistent months later.

“Regular practice of Transcendental Meditation provides a habit of calming down and healing the brain,” said Dr. Vernon A. Barnes, physiologist at the Georgia Prevention Institute at the Medical College of Georgia at Augusta University. Barnes, the study’s lead author.

The findings were published in the journal Military Medicine. The Eisenhower TBI Clinic encourages patients to meditate twice daily, for 20 minutes.