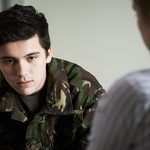 Some months ago, we covered a topic that many readers may have found disturbing. It dealt with the military and what is known as “bad paper.” That is, being discharged from the military under less than favorable circumstances, or dishonorable discharge. At the time, upwards of 10 percent of post-9/11 veterans were found to have received dishonorable discharges—without the various branches of the military taking into consideration conditions like traumatic brain injury (TBI) or post-traumatic stress disorder (PTSD).

The irony of this observed trend is that people who are given bad paper lose their Veterans Affairs (VA) benefits, which people with honorable discharges have access to—such as primary and psychiatric care services. The very conditions that had gone untreated, symptoms of which likely had a role in the event that led to a dishonorable discharge, would likely remain untreated afterwards for having lost one’s benefits. In many of these cases, losing your job in the armed services could be tantamount to a death sentence given that people with untreated mental health conditions often turn to substance abuse and/or suicide to cope with mental illness.

Anyone who makes the decision to serve in the military should be considered courageous, even if they never see combat. It is vital that the military acknowledge the sacrifice of young service men and women. Sacrifice does always take the form of physical wounds. Quite often, it is the wounds that cannot be seen that do the most damage…psychiatric responses to witnessing the lurid horrors of war.

As long as there has been armed conflict, there has been PTSD. And one would think that the various branches of the military would be acutely aware of the correlation between war and post-traumatic stress. Considering the disturbing bad paper trend, the Yale Law School Veterans Legal Services Clinic has filed a lawsuit against the U.S. Army, alleging the U.S. Army potentially gave thousands of less-than-honorable discharges without considering mental health conditions, The New York Times reports. The attorneys who filed the suit are hoping to obtain class-action status.

The lawsuit is directed at the review boards responsible for hearing veterans who would like to argue against the status of their discharge, according to the article. One such veteran and plaintiff in the lawsuit, Steve Kennedy, fought in Iraq in 2007 and 2008. He was diagnosed with depression by the Army, but was given bad paper for going AWOL to attend his wedding. At a later time, the VA diagnosed Kennedy with PTSD, but he was not eligible for benefits because of his discharge status. The suit alleges that his mental health was not considered a factor in his discharge status. Kennedy is one of two plaintiffs in the suit.

“As my PTSD became impossible to manage on my own, my commander told me that the only way I could receive treatment was by leaving the Army with a bad paper discharge,” said Kennedy. “Just like that, the Army wiped away years of distinguished service to my country and deemed it less than Honorable.”

We will continue to follow this important lawsuit. Steve Kennedy’s case does not appear to be unique in the military. Nor his condition. His untreated mental illness led to alcohol abuse and self-injury (cutting himself). Thousands of men and women with untreated conditions like PTSD and depression, turn to drugs and alcohol to manage their symptoms. The substance use often leads to addiction. It has the unintended effect of exacerbating the symptoms that led to the use in the first place.

If you are struggling with a mental health disorder, or addiction with a co-occurring mental illness—please contact Cottonwood Tucson. We specialize in treating addiction and mood disorders concurrently. A failure to address the whole patient can have drastic consequences, preventing recovery.