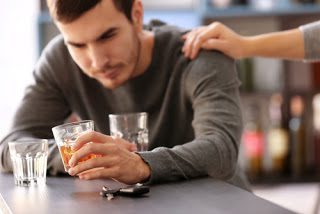 Alcohol is one of 10 substances recognized by the American Psychiatric Association in terms of substance-abuse disorders.  If alcohol is consumed in excess, it can activate the reward center of the brain.  When this system is activated, alcoholic behaviors can become reinforced, while at the same time other behaviors are neglected.  In essence, the person who consumes alcohol in excess is being rewarded for drinking while neglecting other responsibilities such as home and work.

Alcoholism as a substance-use disorder includes characteristics affecting one’s behavioral, cognitive, and physical well being.  The individual will choose the negative consequences of drinking over more positive ones.  The alcoholic will continue to drink regardless of changes to the mind or body.

Alcohol-use disorder is a problem of persistent alcohol use despite the negative consequences of drinking.  Many people may start off drinking socially; however, over time the physical and psychological need to drink becomes overwhelming and the person needs to drink in order to function.  Many individuals will attempt to cut down or stop drinking but are usually unsuccessful.  As with any substance-use disorder, alcohol use becomes the primary focus of the individual’s life.  There is a great deal of time spent in alcohol-related activities such as buying, using, and recovering from alcohol use.

Many individuals can drink and not think about it until the next opportunity to drink arises.  Some individuals can drink every day and not consider themselves alcoholics.  Sadly, many individuals are problem drinkers and do not recognize their behavior as a problematic.  What makes an alcoholic is how drinking affects one’s life in terms of activities of daily life.  If one finds themselves unable to not drink or neglecting responsibilities because of alcohol use, then there might be a problem for which treatment should be considered.

Cottonwood Tucson is an internationally renown residential treatment center providing critically acclaimed treatment for co-occurring disorders. Call us today for information on our integrative approach to treatment for healing mind, body, and spirit: CALL (800) 877-4520
Previous PostWhat Does Nutrition Have To Do With Recovery?Next PostWhat is Hitting Rock Bottom?