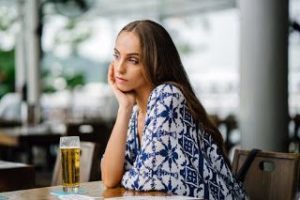 One reason why women are so susceptible to chronic illness and death due to alcohol abuse is due to how their bodies metabolize it. Research provided by the National Institute on Alcohol Abuse and Alcoholism (NIAAA) suggests it’s because women have less water in their bodies compared to men of similar weight, so alcohol concentrates in the blood more quickly. This means women feel the immediate effects of alcohol more rapidly than men for longer periods of time. Even moderate, regular amounts of alcohol are a catalyst to compromising health effects.

Other critical health factors for women and alcohol abuse include:

And while binge drinking is often associated with teens and college students, USA Today cited an additional study that analyzed data from ER visits. For the period of 2006–2014, it showed an increase among middle-aged women admitted for complications due to excessive alcohol consumption either from accidental binging or intentional long-term use.

In addition, there are many other alcohol-related threats to women, including violence, traffic accidents, and sexual health concerns, including unwanted pregnancies or HIV.

The CDC provides a detailed outline of alcohol consumption and related health risks.

Social Acceptability Contributes to the Problem

It’s not that having a celebratory cocktail every so often or a glass of wine with dinner is cause for concern. In fact, numerous medical studies suggest that 5 oz. of red wine, in particular, may improve heart health if enjoyed a couple of times a week.

But how much is 5 oz.? The typical wide-bottomed wine glass holds 15–21 oz., which is the equivalent of three-to-four drinks in a serving. WebMD defines heavy drinking for women as more than three drinks daily or seven weekly. So, the concept of a woman having a glass of wine—or two—after yoga class with friends or once her kids are asleep for the night demonstrates how difficult it is to distinguish between having the occasional beverage and quickly becoming a moderate-to-heavy drinker, with all the associated health risks.

There are many myths surrounding the stigma of high-functioning alcoholism, including tragic circumstances, homelessness, and poverty. While these components may be contributing factors for some people, the National Institutes of Health has facts stating that other social/economic aspects make it easier to hide a drinking problem, especially in certain social settings where drinking is considered normal behavior.

High-functioning alcoholic traits are often found in middle-aged people with:

The social expectation to drink is often hard to resist—anyone who’s gone through recovery can share many stories about this. IHME researchers cite the social acceptance of drinking compared to the scourge of illicit substance abuse. This is one reason why the opioid epidemic continues to dominate the news—yet as stated above, rising deaths from both substances is cause to be alarmed.

According to 2016 statistics from NIAAA, “an estimated 5.4 million women over 18 could be considered as having an alcohol use disorder and needing treatment.” But less than one in 10, or nearly 7 percent, gets specialized help.

Take a moment to consider your public and private drinking habits:

The Cottonwood Assessment Program may be of help. It allows you or someone you love to have a thorough evaluation to determine if formal treatment is the next course of action. Call us today to learn more.