“It’s only my experience, but all the therapy I did before I got sober was me telling myself and the therapist lies, whether blatant or subconscious,” folk/Americana singer-songwriter Amy Speace tells Cottonwood Tucson. “How could I really dig into trauma if I was medicating, not feeling the deep feelings?” But addiction recovery was only the first step in her wellness journey. Years would pass before she took another.

Speace, a Baltimore native, started writing poetry and playing piano in elementary school. She expanded her artistic gifts through theatre as she ventured off to Amherst College and, after graduation, Greenwich Village in New York City. There, she dedicated time to grow as a songwriter, guitarist, and performer, finding inspiration in Joni Mitchell’s poignant lyrics and compositions.

Fable, Speace’s 2002 debut album, awakened the public to her unique style of vulnerability and direct, emotive lyricism. By 2010, another one of her folk idols, Judy Collins, honored Speace’s talent by recording her song “Weight of the World” for the album, Paradise. In 2020, the Americana Music Association awarded Speace “International Song of the Year” for the title track of her album, Me and the Ghost of Charlemagne. Early in 2021, she released the highly-celebrated and reflective album, There Used to Be Horses Here. As a coveted collaborator and worldwide performer, Speace seemed to be making all of her dreams come true.

Yet a shadow of trauma followed her. As a 19-year-old freshman in college, Speace was date-raped while blacked out. Fragments of this violation haunted her for years, influencing her storytelling, the relationship with her father, and how she built her career. Struggling to cope, she developed alcohol use disorder (AUD), coupled with depression and anxiety.

“I basically went into a decades-long spiral of shame, promiscuity, drinking, and disassociating—without realizing that what had happened to me was not my fault,” she told her album biographer, Brittney McKenna, in 2021. To cope with the specter of sexual trauma, Speace “buried herself in overachievement” and hid behind an armor of anger, cynicism, and humor. Then, the armor cracked.

The Light of Sobriety & Motherhood

“When I drank at night, I drank to fill the hole in my soul—the shame of just being me,” Amy Speace says. In and out of therapy for years, she still couldn’t face her addiction, as chaos fueled her art. “I was afraid I’d lose the muse.” But in 2013, she dropped her defenses and sought treatment. It was a soul-saving, meaningful change.

“[Sobriety] opened up a clarity. I began to write the truth more freely. After getting sober my patience with any bullshit—mine or anyone else’s—was gone. I also chose people to work with, whether as my music business team or musicians, who are safe, honest, vulnerable. Who I can trust,” Amy Speace tells us. “Before that, I was looking for anyone who could get me up the ladder. My whole focus in my career began to shift. It took a few records, but I got there: the letting go of caring what others thought.”

This clarity led to meeting her husband and, at age 50, the birth of her son, Huckleberry, now nearly 4. On her personal site, Menopausal Mommy, she wrote, “I am a mother who never thought she’d be a mother…by choice or by circumstance, I never really knew…and then it was just a long string of lost years of hopeless loneliness and bad choices until my 40s were waning and my eggs were drying up.”

As Amy Speace shared the joys of the world through her new child’s eyes, she also endured the death of her father in 2019—the man who disregarded the sexual assault that traumatized her for so long. “Part of my rape story is that my dad denied it and kind of called me a liar,” she told McKenna. “I repaired my relationship with him through recovery. I never had a conversation with him about that abandonment, but I just decided that I was going to accept him for who he was.”

Anyone who’s ever experienced complicated grief due to trauma but not healthfully moved through it knows resolution isn’t simple. Soon Speace realized it, too.

“I didn’t understand fully the pain of my past. I’d been dealing for years in therapy with the effects of my rape in college,” she says. “Getting sober, I’d excavated a lot of that anger and self-shame. But I hadn’t grappled with the trauma inherent even before then.”

During the pandemic, without the core of her livelihood and trapped beneath a surging wave of depression and grief, Speace says a mental break and trauma trigger prompted suicidal thoughts. Her therapist recommended Cottonwood Tucson. In a matter of days, she left her husband and young son behind at their home in Nashville for a 60-day stay in the desert.

Had she still been drinking, she says, she wouldn’t have been able to get past her defenses to seek proper care for trauma. Still, her residency didn’t start off well. ”I was scared I was going crazy, scared I would end my life, scared of losing my marriage, my child. I felt embarrassed that it had gotten so far as for me to have to go away from my home to deal with issues I thought I’d been dealing with for years in therapy,” Speace says. “I didn’t understand what had happened to me, to my happiness. I was angry, terrified, uninterested in making friends. I could barely look at anyone.” 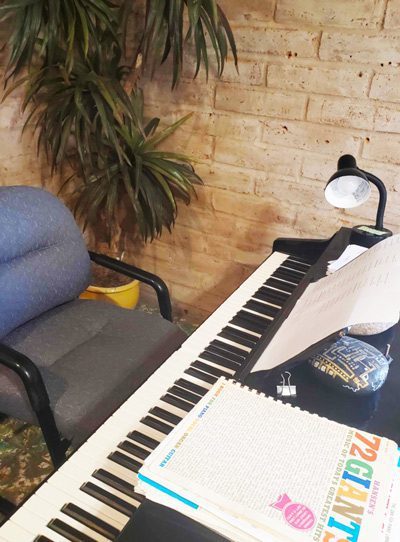 But in one of her first walks around campus, she discovered a piano. “I just started playing the initial chords—I tend to do that, just play some music over and over in a kind of meditative trance to soothe myself. I came back after a meal and did the same. After the next meal I brought my notebook,” Speace says. “Honestly, I don’t quite remember writing the song, as I was in a partial trance—and partly it was the anti-anxiety medicine I was on, combined with the hangover of the traumatic breakdown. It just flowed out of me.”

That song was “Cottonwood,” the first single from her new album, Tucson, released on April 8, 2022. It’s her raw, unmasked confession of “being tired of this masquerade” and the soaring faith she deserves better than the pain of shame and trauma. The lyrics, typical of her noted unabashed style, courageously reveal what she was uncovering during her inpatient treatment:

“All the hurt I’ve carried around,
For 50 years its weighed me down,
I felt more lost out there than found,
There’s no one left to blame.”

“If I look back at that notebook, it fell out almost as a whole piece, a kind of purge of my story. I remember crying a lot,” she says. A particular line, “opened up the basement door,” is a reference to the EMDR and somatic work she experienced during treatment that helped shed light on years of hidden trauma.

Speace considers “Cottonwood ” a love song to the place that helped her heal. The evocative video shows a woman emerging from the shadows.

She lays bare other truths of treatment throughout the rest of the album, addressing topics such as being a woman in a predatory world, the need to stand with other trauma survivors, the break of space and time after the loss of a parent, poet Mary Oliver—reflections of someone ready to move not only through her trauma, but also beyond it, once and for all.

A Story of Hope

Speace is the first to admit that while two months in residential therapy is the start of something very profound, it doesn’t “fix” anything. “There was and continues to be a lot of work since Cottonwood. But in those 60 days I came to understand my own trauma history in a deeper, more profound way than I ever had before,” she says. “I made friends and didn’t feel alone. It was like 10 years of therapy in 60 days.”

Facing the shadowy darkness head-on hasn’t been easy, either. Amy Speace adds that it didn’t make her bulletproof and “rumbled some of her life apart,” including her marriage. “Doing all the work just means more work. Trauma doesn’t get erased. But you learn tools and skills to manage the triggers,” she says. “I think I’m surprised it took until I was this age for it all to unravel enough for me to seek treatment. I wish I’d done it years earlier.”

But she has hope. She believes she’s a better mom for having faced these truths. “Had I not, who knows when they would have seeped out sideways.” When asked what her next chapter might include, she wants to move forward and work on her “stuff” so that trauma doesn’t negatively affect her relationships anymore. And maybe just a little more: “I’d like to be a mind-body-soul healthy human, contributing something to the world,” Speace says. “Rather than taking and asking others to rescue me.”

Considering an Arizona addiction treatment center? For more information about Cottonwood Tucson, call (888) 708-4784. We are ready to help you or your loved one find lasting recovery.
Previous PostThe Connection Between Exercise and MoodNext PostWhat Is Refuge Recovery?